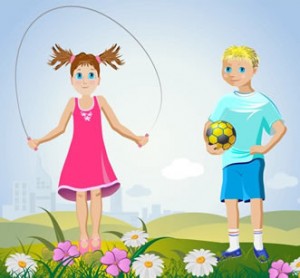 From Your Health Journal…..”I wanted to share a story from ABC News Radio KMBZ by Ida Mae Astute, entitled First Lady Sees ‘Movement’ in Improving Childhood Obesity. Mrs. Obama is celebrating the third anniversary of her Let’s Move project, and the strides made in fighting childhood obesity. She feels that she has brought attention to childhood obesity in our country, as kids are getting more exercise and eating healthier. She even mentioned how childhood obesity is coming down like never before. Mrs. Obama said she will announce a new initiative called the “My Plate Recipe Partnership,” which will provide families with online access to healthy recipes that meet the My Plate guidelines, the U.S. Department of Agriculture’s replacement of the food pyramid. I feel Mrs. Obama is bringing attention to an important need in our country, and helping to educate families on healthy lifestyle. It is great to have her in the media preaching this initiative. Please visit the ABC web site (link provided below) to read the complete article.”

As she celebrates the third anniversary of her Let’s Move! initiative, first lady Michelle Obama told ABC’s Good Morning America co-anchor Robin Roberts that the country is seeing real “movement” on the issue of childhood obesity.

“We’ve really changed the conversation in this country. When we started, there were a lot of people in this country who would have never thought that childhood obesity was a health crisis. But now we’re starting to see some movement on this issue,” the first lady told Roberts. “Our kids are eating better at school. They’re moving more. And we’re starting…to see a change in the trends. We’re starting to see rates of obesity coming down like never before.”

“What we’re seeing is that there’s hope, and when a nation comes together, and everyone is thinking about this issue and trying to figure out what role they can play, then we can see changes,” she said.

Mrs. Obama is set to embark on a star-studded national tour this week to promote and celebrate her Let’s Move! initiative. Her first stop will be in Clinton, Miss., on Wednesday, as she appears at an event highlighting healthy school lunches with Rachael Ray.

“I’m going back to Mississippi because when I first went there, Mississippi was considered one of the most unhealthy states in the nation,” Mrs. Obama said.

“If we could fry water in Mississippi, we would, we would do that,” Roberts, who grew up in Pass Christian, Miss., said. “Food is a culture.”

“But the good news in Mississippi is that they’ve seen a decline in childhood obesity of 13 percent, so we’re gonna go celebrate and highlight what has been going on there. There’s still work to do,” the first lady said.