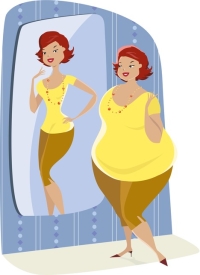 From Your Health Journal…..”I found a great article today from Kate Coil is a reporter with the Bluefield Daily Telegraph about ‘size.’ We have discussed how many young children (especially females) have trouble discovering what is THEIR ‘right size.’ The main problem, many of these girls see commercials or TV shows or ads displaying either skinny or sexy (curvy) woman. Many times, it confuses the young girl into what their body type should be. The problem, the focus goes more on weight / size than a ‘healthy’ size. While the average American woman wears a size 14, the average Hollywood starlet wears around a size 4. Some say a young girls obsession with our weight goes back to their childhood with the first fashion and beauty icon most girls have: a little doll named Barbie. Regardless, young girls need to understand that they need to be healthy first, and along with their parents, finds a happy medium, where they are happy with their figure, but also at a healthy weight. Ms. Coil did such a great job with this article, I had to share some of it here, but link to the full article below. Please visit the Bluefield Daily Telegraph web site to read her full article. If you have a young daughter who is size conscious, this article could help a lot, which is why I wanted to support it here.”

With all of the negative messages young women are sent today about their bodies, weight and how they should look by the movies, it seems like the focus is less on “healthy” and more on “thin.”

There has been a considerable push for more full-figured women to appear on the silver screen. While the average American woman wears a size 14, the average Hollywood starlet wears around a size 4. So, there is no wonder the average American filmgoer enjoys seeing a fuller-figured actress on the screen such as Queen Latifah, Kate Winslet, Melissa McCarthy, or Octavia Spencer.

However, while the American public may be rejoicing upon seeing some more true-to-life figures on the screen, it appears film critics are not. In a recent review of the movie “Identity Thief,” a critic described actress Melissa McCarthy as “a female hippo,” “tractor-sized,” and “a humongous creep.” This is a good example of why it is so hard for larger women to break Hollywood’s size barrier. After all, it seems you can put on a great performance but the critics can’t see through your size to judge it like they would the performances of a lighter actress.

While most people know McCarthy from the show “Mike and Molly” or the movie “Bridesmaids,” I have been a fan since the “Gilmore Girls” days. One of the things I respected about that show was even though McCarthy wasn’t as thin as her on-screen counterparts, her weight was never something that was made fun of or ridiculed. While it seems that there is becoming more acceptance of normal-sized women in Hollywood, weight has been a decades-old issue in the film industry.

Plenty of people like to point out that famed actress Marilyn Monroe wore a size 12 or 14. While it is nice to think the buxom blonde represented a more full figured woman, the reality is this story is a myth. Even back then, not all women could match Marilyn Monroe’s seemingly perfect 35-inch bust, 22-inch waist and 35-inch hips. Not only have I personally seen some of the teeny-tiny outfits Monroe managed to squeeze into but many vintage fashion fans will tell you the way women’s clothing sizes are measured have changed since the 1950s and 1960s.