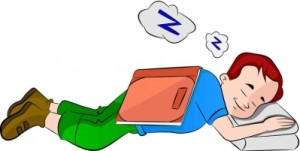 Snoring in children has been a concern for years. Snoring may be a sign of obstructive sleep disorder, where the breathing passage is blocked and less air/oxygen gets to the body. Recent studies point to snoring being involved in ADHD.

Occasional snoring due to a cold is not a problem. Of concern is the constant loud snoring, the child that gasps for breath in sleep, or the periods when the breathing actually stops in sleep.

Common causes of snoring include:

The snoring child who doesn’t get good sleep often shows:

I hear this scenario all the time: “Before she snored, she was sweet, laughing, with nice breath. Now she doesn’t smile, she is cranky, inattentive, tired and sleepy. She is not thriving. Teachers complain of her poor work.”

Recent studies have pointed to behavior problems, inattention, and crankiness in children as part of the ADDH syndrome. In one study, after tonsillectomy and adenoidectomy done for snoring and mouth breathing, 50% of the children who were diagnosed ADHD before surgery, no longer had symptoms. Here the diagnosis of ADHD was made by careful behavioral, cognitive and psychiatric tests. Thus, a child with loud snoring that exhibits ADHD behavior may be simply sleep deprived and may recover when the sleep problem is corrected.

Some children with snoring show poor growth. This can occur because the nose and throat are obstructed so that eating is tasteless and uncomfortable.

Some children with snoring show poor growth. This can occur because the nose and throat are obstructed so that eating is tasteless and uncomfortable. Recall when your nose is plugged; the savory hamburger has no real taste because you can’t smell it with a plugged up nose. Worse, continued snoring can change the physiology and make snoring worse. For example, obstructive snoring can develop into acid reflux.

Note that when a child snores from age 4 to 5, that is about 20% of her entire life span; the important part in growing and learning. Constant mouth breathing can effect the jaw/face development and may necessitate the need for orthodonture.

For the snoring child, therapy consists of reducing nasal blockage and reducing blockage from enlarged tonsils and adenoids. Typically:

Judy S. age 6 was seen because of snoring, and poor appetite. Mother described her being cranky and falling asleep in class. On examination she showed sinus infection and enlarged adenoids. She was placed on Hydro Pulse™ Sinus irrigation and Clear.ease lozenges. Her nasal blockage cleared and her adenoids shrank.

William age five was seen for snoring and occasional wheezing. He showed nasal blockage and enlarged adenoids. Nasal tissue showed allergy. He was positive to dust and pollen on skin tests; he was given allergy desensitization. His allergy cleared and so did his snoring. His behavior problems also cleared.

I can assure you that the happiest and most satisfied persons I have had in my practice are the parents of the children who no longer snore. As parents, they appreciate the sleeping quietly through the night, the pleasant breath, and the change from cranky and irritable to regular happy child.

Often parents are told not to worry about the child who snores, since they will outgrow this. I feel it is best to clear that condition in order to give the child the best health.

– Dr Murray Grossan is a board certified Otolaryngologist who practices in Los Angeles.

More information at www.grossaninstitute.com and my book, Free Yourself from Sinus and Allergy Problems –Permanently.

Disclaimer: Hydro Med Inc www.hydromedonline.com is my company that markets my sinus products.