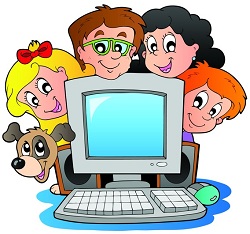 From Your Health Journal…..”Recently, I was interviewed for an article about children and sedentary lifestyle, and I remember an older article I quoted from the New York Times by Tamar Lewin about three years ago called If Your Kids Are Awake, They’re Probably Online. Although it is an older article, it was an excellent article to share with the community here, as I feel technology is one of the major culprits in the rise of childhood obesity. So many children spend almost 8 hours a day using some form of electronics, but to me, technology = sedentary lifestyle – and in my opinion, needs to be cut back significantly and replaced with physical activity. Habits start early in life, and so many young children are exposed to computers and video games at young ages, and carry these sedentary habits into adulthood. This, in combination with less physical activity and poor diet is hurting children on so many levels. Please visit the New York Times web site (link provided below) to read the complete article.”

The average young American now spends practically every waking minute — except for the time in school — using a smart phone, computer, television or other electronic device, according to a new study from the Kaiser Family Foundation.

Those ages 8 to 18 spend more than seven and a half hours a day with such devices, compared with less than six and a half hours five years ago, when the study was last conducted. And that does not count the hour and a half that youths spend texting, or the half-hour they talk on their cellphones.

And because so many of them are multitasking — say, surfing the Internet while listening to music — they pack on average nearly 11 hours of media content into that seven and a half hours.

“I feel like my days would be boring without it,” said Francisco Sepulveda, a 14-year-old Bronx eighth grader who uses his smart phone to surf the Web, watch videos, listen to music — and send or receive about 500 texts a day.

The study’s findings shocked its authors, who had concluded in 2005 that use could not possibly grow further, and confirmed the fears of many parents whose children are constantly tethered to media devices. It found, moreover, that heavy media use is associated with several negatives, including behavior problems and lower grades.

The third in a series, the study found that young people’s media consumption grew far more in the last five years than from 1999 to 2004, as sophisticated mobile technology like iPods and smart phones brought media access into teenagers’ pockets and beds.

Dr. Michael Rich, a pediatrician at Children’s Hospital Boston who directs the Center on Media and Child Health, said that with media use so ubiquitous, it was time to stop arguing over whether it was good or bad and accept it as part of children’s environment, “like the air they breathe, the water they drink and the food they eat.”

Contrary to popular wisdom, the heaviest media users reported spending a similar amount of time exercising as the light media users. Nonetheless, other studies have established a link between screen time and obesity.

While most of the young people in the study got good grades, 47 percent of the heaviest media users — those who consumed at least 16 hours a day — had mostly C’s or lower, compared with 23 percent of those who typically consumed media three hours a day or less. The heaviest media users were also more likely than the lightest users to report that they were bored or sad, or that they got into trouble, did not get along well with their parents and were not happy at school.