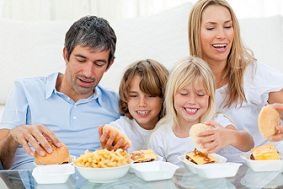 Mass media which includes radio, television and the print media is a great source of information for the society. Every day we are bombarded with images that come out of the television, magazines or the newspapers. The radio is yet another medium that has the potential to captivate our attention. While there are several useful and important messages that are disseminated by these instruments of mass media, it is also important to note that there are some messages that may not be in the best interests of humanity as a whole. The images that we see every day and the message that we hear from these media instruments can have a very profound impact on almost all of the choices that we make. In fact, the choices that we make with regards to our food are also influenced by these very same instruments of the media.

Advertising is the primary source of income for the media. Through advertising, we see several messages on a daily basis. A majority of them will be connected with food and the food industry as a whole. Television channels, radio, print media and the internet are all used to deliver the message about various food items that are in the market. Food manufacturers market their products in these mediums in order to ensure that their products are sold to their target audiences. Millions of dollars are spent by manufacturers in order to make their advertisements attractive. Techniques like attractive jingles, catchy phrases and attractive photography are employed to create an illusory world where the food item that is being marketed will seem irresistible.

Even though this may not have an immediate impact on the consumer, it does make an impact the next time he/she is in a supermarket aisle or in a queue at a fast food outlet. Such aggressive advertising can have a very adverse impact on children and teenagers. This is because children and young adults may not have the intellect to understand that advertising is not for marketing a good product but for selling a product that does not sell well. They will be attracted to the product without even being aware of the ramifications that it may have on their health. In fact, even babies are not spared. The mass media has made young mothers believe that formula feeding is better for the child whereas doctors advise that breast feeding is the best for the baby.

Television in particular has a very profound impact on our food habits. It is the primary influence for children and young adults. A typical American child spends thousands of hours watching television. In fact the child would have spent less time in his/her classroom. The impact that the number of advertisements that he/she must have watched can only be imagined. The messages that are portrayed by these advertisements are then remembered by the child that will then manifest as his/her choices. The media also has a tendency to portray a particular kind of body image as ideal. Celebrities and models are portrayed on television and the viewer is made to get the impression that theirs is the perfect body type. This may lead to many misconceptions about the relation between health and body shape.

Media instruments like television are also directly responsible for obesity and overweight. Children who watch a lot of television will demand the food items that are in commercials. These need not be healthy food items. Television viewing has even been inversely related to the intake of healthy food items like fruits and vegetables. It also needs to be said that media can also have a positive influence on food habits. When the messages that are being transmitted are accurate and promote healthy food choices, it may have a positive impact on the food habits of the general public. It can be said without any doubt that the media does have an impact on our food habits. It is therefore important to ensure that the messages that are broadcast are accurate and advocate healthy diets and healthy food.

– I’m James Lopez concerning in moderation and preservation of essay writing companies an online community that serves as a stage for college students to cooperate and clarify their doubts about their essay writing requirements.