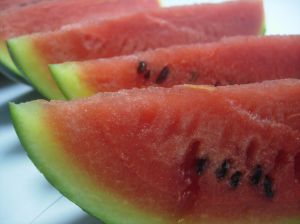 Be sure to pick up a watermelon — or two — at your neighborhood farmers’ market.

It could save your life.

A new study by Florida State University Associate Professor Arturo Figueroa, published in the American Journal of Hypertension, found that watermelon could significantly reduce blood pressure in overweight individuals both at rest and while under stress.

“The pressure on the aorta and on the heart decreased after consuming watermelon extract,” Figueroa said.

The study started with a simple concept. More people die of heart attacks in cold weather because the stress of the cold temperatures causes blood pressure to increase and the heart has to work harder to pump blood into the aorta. That often leads to less blood flow to the heart.

Thus, people with obesity and high blood pressure face a higher risk for stroke or heart attack when exposed to the cold either during the winter or in rooms with low temperatures.

It turned out that watermelon may be part of the answer.

Figueroa’s 12-week study focused on 13 middle-aged, obese men and women who also suffered from high blood pressure. To simulate cold weather conditions, one hand of the subject was dipped into 39 degree water (or 4 degrees Celsius) while Figueroa’s team took their blood pressure and other vital measurements.

Meanwhile, the group was divided into two. For the first six weeks, one group was given four grams of the amino acid L-citrulline and two grams of L-arginine per day, both from watermelon extract. The other group was given a placebo for 6 weeks.

Then, they switched for the second six weeks.

Participants also had to refrain from taking any medication for blood pressure or making any significant changes in their lifestyle, particularly related to diet and exercise, during the study.

The results showed that consuming watermelon had a positive impact on aortic blood pressure and other vascular parameters.

Notably, study participants showed improvements in blood pressure and cardiac stress while both at rest and while they were exposed to the cold water.

“That means less overload to the heart, so the heart is going to work easily during a stressful situation such as cold exposure,” Figueroa said.

Figueroa has conducted multiple studies on the benefits of watermelon. In the past, he examined how it impacts post-menopausal women’s arterial function and the blood pressure readings of adults with pre-hypertension.