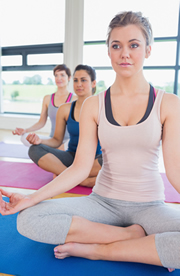 Think a yoga-Pilates mix, sprinkled with some modern dance and Tai Chi for flavor. That’s Cyntergy, a group exercise class that’s hotter than hot, and sweeping the nation.

Class participants use yoga mats, bare feet, and dri-fit clothes for that Bikram-style sweat that builds up in the warm room. Though temps are not cranked up like in a Bikram yoga class, the fast flow of the movement gets the body sweating. Bring your towel!

While it’s not easy, Cyntergy is low impact and gentle. It’s one of those forms a participant can modify easily to match their goals or restrictions. When the class is over, you feel both exhausted and exhilarated simultaneously. You know you worked out and you check the schedule for the next Cyntergy class because you can’t imagine missing it.

“It’s everything,” says 48 year old Katie Nilges, who has taken 6 Cyntergy classes. “It hits cardio, strength, and flexibility all at the same time.”

While it’s not easy, Cyntergy is low impact and gentle.

The age of students ranges from 16 year olds to 75 year olds, spiral twisting next to each other. In a Redding, California health club, 74 year old member Shorty Armstrong lays down a towel the length of her mat, ready for what comes next.

“I’ve been doing these classes for three years. My first class I noticed this was different. It was hard. It moved faster than yoga, but I loved it, and I’ve been coming ever since,” says Armstrong.

This mind/body experience put together by Body Training Systems to “center your energy” is divided into sections: focus, salutations, challenge, balance, core back and front, hips, spirals, folds and restore. In the final track, you lay quietly, meditation style, allowing the energy to settle.

“When I tell people what Cyntergy is, I say it’s a cross between yoga and Pilates,” says Kama Hokamson, Cyntergy instructor. “I just love it.”

So do her students. Get to Hokamson’s class early, or you’ll see a “class full” sign on the door. 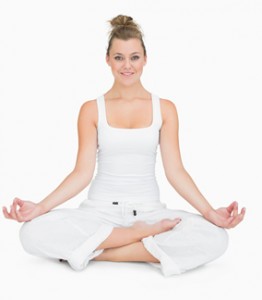 The other very distinctive feature of Cyntergy is the music. While instructors’ playlists obviously vary, the range of music goes from a pop ballad during a balance track to a rap artist during front core. The compilation works with the flow, keeping you moving and humming along in your triangle pose.

Exercise needs to be part of your daily routine. With group exercise forms like Cyntergy, that’s no sweat.

– Guest author, Jamie Weil – After dropping 85 pounds in 6 months, Jamie became a health coach and has helped over 55 people drop more than 2,700 pounds over the past two and a half years. Featured in the “I Did It” section of May, 2013 Health Magazine, you can watch her story at www.jamieweil.net. (Check out the free resources section there and follow her ‘Healthy Living’ blog for tips and inspirations.) Jamie is a freelance writer and novelist, focusing on health issues, and has published over 50 articles in newspapers, magazines, and books. She is represented by literary agent Rachael Dugas of Talcott Notch Literary. Above all, she loves to sweat.