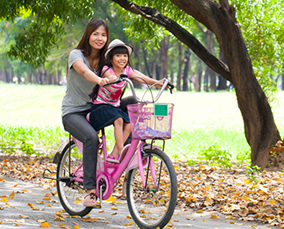 You’ve found yourself in the market for a good bicycle or two. A trip to the sporting goods store has you nursing a serious case of sticker shock, so you’re thinking of buying used. Many would-be buyers–in all markets, not just bicycle shoppers–are reluctant to buy used, thinking they don’t want someone else’s half-dead recycled machine. But the fact is that bicycles, like many types of exercise equipment, often end up for sale in remarkably good condition, and for reasonable prices. Classified Ads are typically full of such listings, and a little patience can get you quite a bargain. Texas is an above-average market for these goods because our wide-open spaces make it more cost-effective to travel a few miles to pick something up. Compare the 220 miles of US 83 between Abilene and Austin, and you’ll find it a much more pleasant drive than the comparable route from Washington, DC to New York City. Which one would you rather travel to pick up a bulky item like a bicycle?

The quantity of equipment on the market works in your favor, too. Competition is your friend, and in large markets like Texas–where commerce patterns spread over thousands of square miles–there are plenty of people offering the items you want. Competition goes up, price goes down.

Why is there so much of this stuff for sale? There are several reasons for owners to lower the kickstand and hit the market.

Sometimes a first-time buyer purchases something on the light-duty, low-cost side. It’s a sampling strategy–they don’t want to sink too much cash into it until they know it’s a hobby they want to continue. In time, maybe they learn more about bicycles and realize that a sleek road model isn’t what they need for a ride through Palo Duro Canyon. It could also be the sale of a treadmill that didn’t provide that Palo Duro view. Or maybe their strength level was such that their free weights didn’t properly combine to give them the load they wanted. Whatever the issue, they have something lightly used (read that as “broken in and proven functional”) that they no longer need, and they’re ready to unload it at a reasonable price.

On the reverse of that coin is the other outcome, the rider who abandons exercise and moves to a different pursuit. Or the couch. Maybe the owner has decided that driving from Sweetwater to Aspen is not a trip they’re willing to make very often, and the skis are for sale. Perhaps we’re too far inland for seafaring recreation. And there are always those who haven’t stuck with a New Year’s resolution to lose weight. Any way you slice it, they’re done with the equipment, and it’s there for your taking.

Some buyers may purchase equipment and begin to utilize it. For example, they get a stationary bike and start burning up the miles. They like the weight loss, muscle tone, and conditioning they get, but realize they aren’t gaining much upper body strength. So rather than further congest their house, they get a gym membership to gain access to the additional machines they need. Soon they’re just using a stationary at the gym and no longer need the one at home, so they’re ready to sell it to defray gym membership costs. Ta-daa! Stationary for sale!

The point is this: Whatever the exercise gear you need, there’s no reason to pay full price for it simply because you fear its history. There are good reasons for a perfectly functional item to be for sale at a reasonable price. Enjoy the savings.