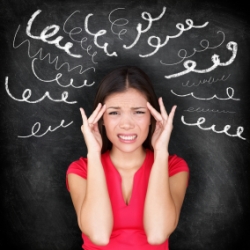 Our frustrations are often blamed on modern society, but monkeys had the same frustrations 50 million years ago. They chased rewards and failed to get them. They scanned for threats and got hurt anyway. They were let down by their fellow monkey. But frustration helped them thrive, and it can help you too.

Frustration comes with intelligence. Lizards don’t get frustrated because they don’t have enough neurons to ponder a Plan B when their Plan A falls short. Primates have a big stock of extra neurons so we can generate alternatives instead of just repeating hard-wired behaviors. But untried alternatives are risky, so we stick to Plan A until we have a sign that it’s not worth our effort. Frustration is that sign. Frustration is a tool for primates to stimulate more happy chemicals. Here are some examples.

Dopamine
Monkeys love to eat nuts, but cracking them open is frustrating. A monkey will bang away at a nut for a long time because the good feeling of dopamine flows when a reward is anticipated. Persistence often works, but if you’ve picked up a bad nut or your technique is flawed, persistence gets you nowhere. Knowing when to stop and try something different is the way to succeed. Frustration helps a monkey know when to stop. It’s a bad strategy to give in to frustration quickly is a bad strategy, but it’s also bad to ignore frustration forever. The primate brain decides when to honor frustration and shift its focus. That opens a monkey to new information so it finds a better nut or a better technique. Our brains don’t shift easily because old dopamine pathways have value and new paths are risky. It takes a big investment of energy, and frustration motivates that investment.

Serotonin
When a monkey reaches a juicy mango in a tree top, a bigger stronger monkey may snatch it from him. This is frustrating, but he may not resist because it hurts to get bitten more than it hurts to lose a snack. He will look for a new piece of fruit instead. He doesn’t want a distant fruit because isolation brings predators. He scans for a fruit that’s near the troop but not near a more dominant individual. His brain is skilled at comparing himself to other monkeys. When he compares favorably, his serotonin surges and he goes for the fruit. This is a nice monkey who is not consciously interested in one-upping others, but he has needs. He learned to meet his needs in youth with the help of serotonin. A young monkey is never fed solid food. He learns to get food while nourished by mother’s milk, and that learning includes how to manage the conflict that comes with group life. After weaning, a juvenile monkey will starve unless he holds his own in a group of monkeys who are bigger than him. He must know how to hold back to avoid harm until his serotonin says its safe, and then go for it. Holding back is frustrating so he eagerly seeks opportunities to let go. All too soon, another dominant monkey frustrates him, but he’s always alert for interactions that he can dominate. (And she is alert for interactions she can dominate. Male pronouns are used for simplification.)

Oxytocin
A monkey feels good when he gives or receives a grooming because oxytocin is stimulated. But the quest for oxytocin often leads to frustration. Sometimes you groom others and they don’t groom you back. Sometimes they forget you when mating season comes, or when meat is being shared. Sometimes you risk your life defending a grooming buddy and they don’t defend you back. Frustration motivates you to take your grooming elsewhere, but that can be frustrating too. You might even suffer the indignity of having your grooming offers rejected. Frustration can build to the point that you consider leaving the troop. You risk being eaten alive out alone in the world, but the prospect of new monkeys treating you right lures you on. It’s hard to build trust bonds with new grooming partners, but frustration motivates you to keep trying.

In today’s world, you can eat shelled nuts from a bag on the couch. You can sue people who steal your mangoes. You can negotiate contracts with your grooming partners. But we still get frustrated because our brain keeps trying to stimulate more dopamine, serotonin and oxytocin. The next time you feel frustrated, you can see it as tool that opens you to new information. You can celebrate your ability to design a new strategy instead of mourning the disappointment of your expectations. We can never be sure which choice is best, but we can be sure that our brain evolved to make such choices.

– Loretta Breuning is author of the book Meet Your Happy Chemicals, which shows how you can naturally stimulate more of the dopamine, serotonin and endorphin that make you happy. Dr. Breuning is Professor Emerita of Management at California State University, and a Docent at the Oakland Zoo.

Frustration Healthy How To Len Saunders Make Work You