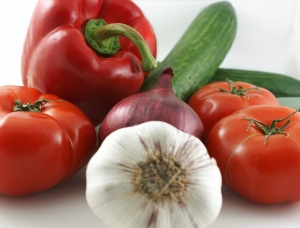 Garlic truly is a superfood—it lowers blood pressure and triglycerides…enhances the immune system…and has potent antibacterial, antifungal, antiviral, anticancer and antioxidant properties. Researchers decided to see whether “old” garlic that has sprouted would show any changes in its nutritional powers, so they allowed ordinary garlic to sprout. Then the garlic and sprouts were minced, ground and turned into an extract. For comparison, a similar extract was prepared using unsprouted garlic.

According to a study published in the Journal of Agricultural and Food Chemistry [1] sprouted garlic actually has stronger health benefits than unsprouted ones. They conjecture that the pod, when sprouted for five days, showed the maximum ability to help the human body.

The researchers aren’t sure which of the compounds in sprouted garlic are responsible for the increased antioxidant activity. However, they did find that sprouted garlic contains compounds that don’t exist in unsprouted garlic. This makes sense when you think about the fact that nature is meticulously protective of its species. By amping up antioxidant activity and creating protective new compounds, the immature plant—meaning the sprout—may be better able to protect itself from harmful pathogens.

Garlic has been used since ancient times as a medicinal remedy. It is a member of the allium family of plants, which also includes onions, chives and leeks. Garlic’s medicinal powers are attributed to its sulfur compounds, including a substance called allicin, which is formed when garlic is crushed or chopped. Besides fresh cloves, garlic is available in supplement form made from fresh, dried, or freeze-dried garlic, garlic oil and aged garlic extracts.[2]

Garlic is a great friend to our bodies.

It has cancer-fighting properties: The process of sprouting garlic stimulates the production of phytochemicals, which has the ability to block and inhibit the activity of carcinogens (cancer causing chemicals) in the body. Garlic also produces a large amount of anti-oxidants that have preventative qualities for scavenging free oxygen radicals – one of the fertile soils for cancer growth.

It protects your heart: Phytochemicals boost enzyme activity and block the cholesterol deposits that lead to plaque formation – an important factor in heart and artery disease.

– Kac Young , a former television director and producer, has earned a Ph.D. in Natural Health and is a Doctor of both Clinical Hypnotherapy and Naturopathy. She is the author of 10 books. Heart Easy is a system of nutritionally sound, delicious meals that promote heart health, long life and taste great. Traditional recipes are turned into heart healthy meals that anyone can make. The health results are outstanding.