Epilepsy is a seizure disorder that occurs in humans and dogs. 1 in 26 Americans will develop epilepsy, 1 in 5 Dogs will too. MedVet Medical & Cancer Centers for Pets is participating in promoting International Epilepsy Day on Monday, February 8. 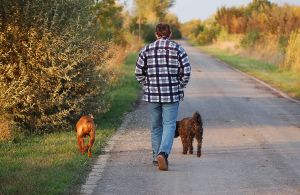 Epilepsy is a seizure disorder that occurs in humans and dogs. MedVet Medical & Cancer Centers for Pets is participating in promoting International Epilepsy Day on Monday, February 8th. This is an annual event to promote awareness of epilepsy worldwide. Epileptic seizures can vary from brief and very subtle trembling to long periods of vigorous shaking and disrupt lifestyles for affected people and their canine best friends. Similar to people with epilepsy, the cause is unknown in most dogs, although more serious problems, such as trauma, infections or cancers also occur.

According to the American Epilepsy Society, 1 in 26 Americans will develop epilepsy in their lifetime adding more than 200,000 new epilepsy cases annually to the 3 million already living with the condition in the US. According to Dr. Michael Podell, MSc, DVM, Diplomate ACVIM (Neurology), head of the Neurology and Neurosurgery department at MedVet Chicago and Affiliate Professor in the Department of Neurosurgery, Pritzker School of Medicine at the University of Chicago, “the prevalence of epilepsy in dogs in the U.S. may range from 0.55 percent to 5 percent.” That could mean that about two million dogs are affected.

Dr. Michael Podell of MedVet Chicago states, “There is no cure for epilepsy. Living with epilepsy can be extremely difficult not only for the humans and dogs that have the disease but also for the caregivers. Unlike other diseases, a long period of normal activity may occur between the seizure events. The focus of treatment is to balance the best quality of life for the patient and owner with optimal seizure control.” The diagnosis of epilepsy involves consultation with a board-certified veterinary neurologist who may recommend more advanced diagnostic tests such as magnetic resonance imaging (MRI). Many patients do not necessarily need more tests, but to start appropriate anticonvulsant treatment. Many of these drugs used to control seizures in humans and dogs are the same.

Dr. Podell was the chair of the panel and lead author on the upcoming American College of Veterinary Internal Medicine (ACVIM) Consensus Statement by the College of Neurology to be published in the Journal of Veterinary Internal Medicine titled: “2015 ACVIM Small Animal Consensus Statement on Seizure Management in Dogs.” Dr. Podell states that he hopes this information “helps to improve the care and treatment of epileptic dogs throughout the world.” Similar to the International League Against Epilepsy, which works to provide guidelines for best practice standards of care for epileptic people, the International Veterinary Epilepsy Task Force (IVETF) was recently established to work towards these same goals in veterinary medicine. Dr. Podell is one of the founding members of the IVETF, which held their inaugural meeting this past year, and has also published several consensus statements on epilepsy.

Epilepsy is a common disease in dogs and can occur in most other animal species. The disorder is characterized by unpredictable seizures in which the brain produces sudden bursts of electrical energy. Seizures differ in movements and alternations in consciousness from subtle to severe tonic-clonic muscle movements. There is not a cure for epilepsy however daily medication can decrease the frequency and severity of the seizures in the majority of dogs. Commonly used drugs include phenobarbital, bromide, zonisamide, and levetiracetam.

What to Do if A Dog is Having a Seizure

If your dog has a seizure, keep your dog safe. If your dog is near stairs or water, move them away while taking care not to get bit. Seizuring dogs are not aware of what they are doing and their chomping behavior can result in severe bites. Dogs will not swallow their tongues so stay away from their mouths. Most seizures cease in two to three minutes. If your dog seizures, please call your veterinarian or emergency clinic immediately.

If a pet is experiencing a medical emergency, pet owners are encouraged to immediately contact their family veterinarian or MedVet Chicago for guidance and help. MedVet Chicago can be reached 24 hours a day, every day of the year, by calling (773) 281-7110 or in-person at 3123 N. Clybourn Ave., Chicago, IL 60618. For more about MedVet, go to medvetforpets.com.

Michael Podell, DVM, MSc, Diplomate ACVIM (Neurology) is a board-certified veterinary neurologist at MedVet Chicago. Dr. Podell was a Full Professor in the Departments of Veterinary Clinical Sciences and Neurology at The Ohio State University until 2002, when he moved to Chicago to open the area’s first veterinary neurology and neurosurgery practice. Currently, Dr. Podell continues to demonstrate his passion for veterinary medicine and neurological sciences through his daily work with neurologic patients at MedVet Chicago, numerous published book chapters and articles, and as an Affiliate Professor in the Department of Neurosurgery, Pritzker School of Medicine at the University of Chicago. Dr. Podell is actively engaged in comparative medicine curative research for animals and people through clinical trials, and educating the future generation of veterinary neurologists.

Dog Having Healthy Len Saunders Seizure What To Do