Many people enjoy the change in seasons. Fall and winter bring the possiblity of snowfall, the idea of curling up next to a warm fire, and a chance to see loved ones during the holidays. However, there are a lot of people who do not do well during these darker months. They experience irritability and depression throughout this part of the year. While many want to chalk it up to being nothing more than a case of the “winter blues”, scientists have begun to show us that it may actually be a quantifiable condition known as Seasonal Affective Disorder.

Seasonal Affective Disorder, commonly known as SAD, is a mood disorder in which depression occurs at the same time every year. Experts theorize this is due to reduced exposure to sunlight in the fall and winter months leading to a decreased reduction in various hormones and neurotransmitters that have soothing and calming effects on the body. Some other symptoms of this seasonal depression include fatigue, carbohydrate craving, and weight gain.
Typically starting in young adulthood, people with SAD experience a various degree of symptoms ranging from feeling out of sorts or mildly irratible to debilitating depression that can negatively effect relationships and productivity.
Full Spectrum Light and Health

It’s no secret that sunlight is essential to life. The sun provides the earth and its inhabitants with a spectrum of light from infrared to near ultraviolet. A lack of sunlight is considered to be the number one cause of Seasonal Acute Disorder. Due to this factor, SAD is more prominent in locations further from the equator which experiences the most hours of sunlight in a day throughout the year. People living in areas that experience shorter days or frequent gray skies are susceptible to SAD during the fall and winter months.

Chromotherapy in the Treatment of SAD 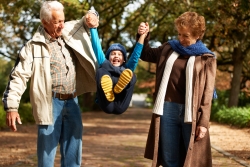 It has been known for a long time that colors can have an influence on our moods and emotions. Chromotherapy is the science of using colors to improve mental well-being and overall health. While chromotherapy has many different health benefits, it has been seen as a particularly good way of treating SAD. Patients experiencing SAD are frequently prescribed sessions in front of a light box for a prescribed period of time to make up for the lack of sunlight during the darker seasons. This therapy can now be found in many home saunas. Manufacturers of home saunas have caught on to the health benefits of using infrared light and now install them in their products giving sufferers of SAD a new, easy way of coping with winter depression.

Human beings can at times be stubborn and feel the need to just “grind it out” when it comes to things like mood disorders. Many probably feel it is just the way things are and view the winter months as an inevitable time of sadness. Assumptions that disorders such as depression can only be treated chemically with doctor prescribed pharmaceuticals which can have mild to severe side effects may be a part of people’s lethargy in seeking treatment. Chromotherapy and infrared saunas can now be seen as an alternative in the effective treatment of Season Acute Disorder.

– Andrew is a health blogger with a passion in natural medicine and treatments. In his free time he enjoys hiking and camping in the great outdoors. His latest intrest has been in the area of using infrared technology to treat many alements naturally for which Sunlighten has been a big source of inspiration.