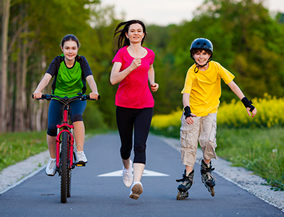 The most common notion surrounding kids is that they’re more prone to going outside and playing there for what could easily turn into hours. However, some kids find themselves spending less time outside mostly because of other leisure activities such as playing video games and checking their own social media accounts. Nowadays, indoor activities tend to take up most of their free time instead of engaging in outdoor play. For them to get moving, presented below are some fun ideas that kids can do outdoors instead of occupying themselves with sedentary hobbies that can negatively affect their health in the long run.

Why Should Kids Spend Some Time Outdoors?

In an ideal world, every kid should have the right to some outdoor play time. Unfortunately, some kids all over the world spend less time outside of their own homes which can be attributed to a couple of things. The first one is that pastimes that don’t require as much physical activity are increasingly becoming popular as they’re more convenient and can be done even while indoors, while the second one is that some parents worry that their kids might get injured after playing outside. Despite those two things that are forcing more and more kids to stay indoors, they should be given enough time to play outside for the following reasons:

● Spending some time outdoors gives kids a sense of adventure as they’re free to roam wherever they wish as long as there’s a parent or guardian to watch over them at random intervals.

● Making sure that kids have at least a few hours’ worth of outdoor play teaches kids essential social skills that they’ll need to use more often once they become full-fledged adults themselves.

● Outdoor play also makes kids healthier as exposure to early morning sunlight provides them with the right amount of Vitamin D that they need for their bones to grow strong.

What Are Some Outdoor Fun Ideas That Can Get Kids Moving?

While there might be times when the outside weather isn’t welcoming which can force kids to spend the rest of their day indoors instead, they should spend at least a few hours outdoors whenever the weather would allow them to do so. To make it more fun for them, here are some ideas that can get them moving in no time at all:

1. Go on a kid-friendly nature hike.

Some outdoor hiking trails might not be as safe for kids, but there are others that they can walk across with ease.

● Kids have to wear the right shoes though so that their feet won’t get hurt while they’re crossing uneven terrain.

● At least one adult should accompany the kids so that their safety is ensured, especially as some hiking trails may have slippery rocks and other hazards.

Even with only a handful of tires, some rope, and a bunch of PVC pipes, an adult can build an obstacle course that kids can attempt to complete.

● A well-designed backyard obstacle course can make kids use both their physical and mental skills as they encounter various hurdles that are sure to challenge their idea of outdoor play.

● A game of running around an obstacle course can even be turned into a contest where the kid who finishes it in the least time gets a reward.

3. Turn a normal walk outside into a scavenger hunt.

Even something as seemingly simple as taking a walk outside can be turned into a scavenger hunt where kids can play detective as they tick things off of a checklist.

● All that’s needed for the kids to do a scavenger hunt is a sharp eye and the willingness to ask other people in case they’re having trouble finding an item.

● While some of the item descriptions can be made slightly more cryptic for the scavenger hunt to be a bit more challenging, they should remain easy enough for a kid to find.

Part of the reason why ball games have grown to become some of the world’s most popular sports is that they can be played outdoors almost everywhere.

● A couple of makeshift goals can be built in an outdoor area so that the kids can play a simple game of soccer.

● A football game outside with the kids can also be played even without any goals by just kicking the ball and passing it around.

As fewer kids spend some time outdoors, their overall health can get compromised as they don’t move around as much. Thus, they would want to drop the video games and smartphones even for a short while and make sure that their parents would allow them at least a few hours of outside play so that they can grow up to become healthy adults themselves.

– Jessica is a professional health expert who works for some major health industry giants. She currently writes for Membersown and is dedicated to helping people learn more about health related topics along the journey. When she’s not a health advocate, she enjoys some down time traveling or talking with family.