Over the years not much changed. My daughter continued spitting out any and all liquid medicines on me. She had gotten slightly anemic at one point and needed iron tablets or iron liquid. I do not know if you have ever smelled iron in liquid form but I knew that was not going to go over well. I thought it was time to use some of my mom’s old tricks (which I am just sure she stole from Mary Poppins) and mash up the pill in a spoon full of sugar with a little water. Of course we always had a juice chaser on hand to help it go down. This worked a little better but it was tedious to say the least. She would sit there and look at this spoonful of sugar for at least five minutes in anticipation and get her anxiety level way up there just to make it fun. This was a long and arduous road for my girl, I believe she was a teen before she could swallow pills and even then she can only do very small pills and one at a time.

She was also a great deal of fun when it came to giving blood. This child did require several people holding her down. What a stress filled day it was when we were told she needed shots. Who wants to hold their child down and have them looking at you with those pleading eyes? This went on well into her teens as well. We were blessed in that she was an intellectual child and finally came to grips with the foolishness of her fears. Which in turn did help her to be able to control herself but it is still a very big deal for her.

On the other hand the son that ripped off the bandage upon giving blood and stomped on it has grown into a very big man/boy which the phlebotomists at our local lab have come to recognize. He still loves to watch them as they extract the blood; he sits very still and watches the needles go in and come out. And when they put on the bandage he is still ready to get out of there immediately. But for some reason as he has gotten older and much bigger he tends to pass out upon standing. It could be the fact that he eats very little all day until supper when he absolutely gorges himself to fill up for the next day. Or the fact that he forgets to drink before going. After an over two hundred pound man/boy almost falls on top of one of the women phlebotomists they begin to take precautions. He is now required to lie down while giving blood and stay down for at least a few minutes. 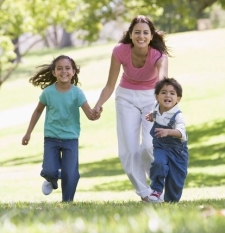 Hopefully you will not have similar experiences with your children but if you do never fear because they do grow up and most of the time they grow out of it. Or at least they get to the point where they do not want to draw attention to their phobias and they learn to cope. Either way it works out and one day they will get the same looks of betrayal they gave you and actually feel compassion on dear old mom and dad.

– Always curious, Ashley Hardway is constantly learning and passionate about sharing what she learns with others. Based in Houston, Texas, she loves to help families grow stronger, help their environments and communities, and keep moving forward! Check out @NannyLady on Twitter to connect and find out more.