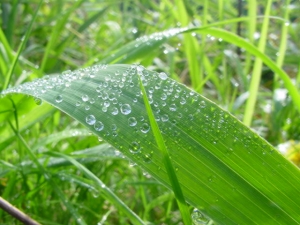 Nature has been modifying plants and animals since they came into existence. When the climate changed, plants and animals adapted or became extinct. These adaptations occurred within the plant or animal by selecting those traits that allowed it to survive, for example, not needing as much water in times of a drought.

Now that humans are more knowledgeable about heredity, we have decided to manipulate genes artificially to produce traits we find beneficial. This is done by taking the genes from one species and forcing

This is done by taking the genes from one species and forcing them into another species’ DNA.

them into another species’ DNA. For example, from a soil bacterium that produces a natural pesticide, the gene has been altered to make the pesticide stronger and then it is forced into corn or soy DNA. As a result, the whole plant, i.e. every cell in that plant, produces this pesticide.

Another example is Roundup Ready soy. The DNA of the plant has been artificially altered so that it survives application of the weed killer RoundUp. Some weeds, however, have become resistant to RoundUp requiring farmers to apply more of it and more often than originally promised.

Many animal studies and anecdotal reports suggest harmful side effects from these practices. (Here is the most startling) In particular, a significant number of animals have developed liver and kidney damage, breast tumors, digestive disorders like chronic diarrhea, and/or sterility. People are noticing an increased number of food allergies.

There are enough reports of damage to question the safety of these altered plants for animals and humans, at least until independent research can prove them to be truly safe.

Unfortunately, at this time over 80% of the soy and corn crops in the United States are genetically modified.

Unfortunately, at this time over 80% of the soy and corn crops in the United States are genetically modified. The concern about the ill effects from these foods is world-wide. Over 50 countries are so concerned about GM foods they already require the labeling of them. The US is not one of them. Some have banned them. Russia has forbidden the importation of our GM corn.

Two main sources for the damaging results are 1) collateral damage to the plant’s or animal’s DNA when the other DNA is forced into it, and 2) increased exposures to pesticides which we know to be dangerously toxic to living beings.

For those who wish to avoid GM foods at this time, the recommendations are:
1) eat organic foods
2) don’t eat corn or soy products, and products derived from them, unless the label says organic or has the seal of approval from the nongmoproject.org
3) download the brochure from ShopNoGMOs.com.