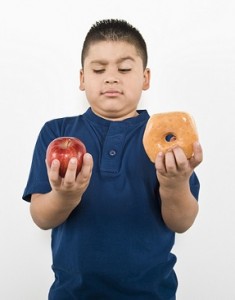 If you’re reading this then you must be a responsible parent—or at least, trying to be one.
You deserve a pat on the back.

But you’ve got to admit, you’re a much better parent before you had kids. Back then, you were pretty sure of what you will and will not become. You’ll be a “cool” parent. You promised yourself you will not become the kind of parent who forces her kids to eat their broccoli or drink their milk.

They want fries? They get fries.

While fulfilling your dream of becoming a cool parent sounds fun, you may want to play the “responsible parent” while you’re at it. According to the World Health Organization (WHO), the prevalence of childhood obesity has increased at an alarming rate. Overweight and obese children are likely to stay obese into adulthood and are more likely to develop serious health problems such as cardiovascular diseases and diabetes at a younger age.

Bottom line: playing the “cool” parent all the time may cause your kids to fall into the trap of a high calorie diet with low nutritional value—one of the factors that contribute to childhood obesity.

If you’re guilty of helping yourself to some of your kid’s favorite “bad” foods then it’s time for your diet to grow up!

Here is a list of foods you should never let your kids eat:

Put down that box!

No matter how adorable their colors and shapes are, breakfast cereals are no-nos. They may be “breakfast champions” for people who are always on the run, but not for your kids. Breakfast cereals are often laden with sugar—hello, calories and tooth decay! You may see some cereal boxes that boast whole grain goodness but the amount of added sugar that comes with the package is a serious deal breaker.

Fresh fruit juice—the liquid that comes from a real fruit, can be healthy when consumed in moderation. Fruits are chock-full of nutrients and as an added bonus they are “naturally” sweet. Fruit juice drinks, on the other hand, contain juice, water, sweeteners and perhaps other flavorings to make it taste natural. Here’s the thing: they are not natural.

But it says “No added sugar”

Did you check the list of ingredients? Most bottled beverages that promise calorie-free sweetness contain artificial sweeteners—some of the FDA-approved ones include aspartame (NutraSweet, Equal), sucralose (Splenda), and saccharin. According to The Harvard Medical School Family Health Guide, while these artificial sweeteners got FDA’s thumbs up, they might still be a problem because they may encourage bad eating habits (especially among children) by promoting a craving for sweetness. 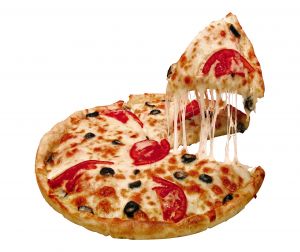 Why is pizza not good for you again?

Oh, right! Because it’s high in saturated fat and sodium.

However, the love for this food is so intense that the Department of Agriculture released a report on its consumption. According to the report, pizza contributes about 6% of the total energy intake of children, 2 to 19 years old, and 4% for adults.

Experts would argue that pizza is not as bad for your health as you think it is. If fact, according to the report, it represents more than half of the total daily intake of lycopene, a potent antioxidant. The problem lies on when and how you eat it—hello, pizza abuse. According to Guiseppe Russolillo, president of the Spanish Association of Nutritionists, pizza is an artisanal product in majority of Italy. In US it’s more related to ‘junk food’ as it is often bought from a fast food chain or frozen at supermarkets.

Russolillo pointed that pizza shouldn’t be consumed more than 2 or 3 times a month and shouldn’t be part of your daily diet, even less for children. A healthy diet, one that contains a variety of fruits and vegetables, is needed to support the nutrient demands during the period of growing development in children. No, adding extra vegetable toppings won’t do. Stop drooling over that pizza and set a good example!

You knew this was coming.

Forget the “cool” parent act and know this: the deep-fried potato strips we all love are by nature high in calories and fat. Of course you already know that! But you’re still in a state of denial. Well, it has to stop. We all know that nutritionists and other health experts are not exactly fond of fries because they are high in sodium and oozing with artery-clogging fat. Here’s another shocker: it can cause cancer.

When a starchy food such as potato is cooked at a temperature above 248 degrees, it produces a chemical called acrylamide. According to National Cancer Institute, studies in rodent models have found that exposure to this chemical poses a risk for several types of cancer. Although evidence from human studies is incomplete, the National Toxicology Program and the International Agency for Research on Cancer, considers acrylamide to be a “probable human carcinogen”. 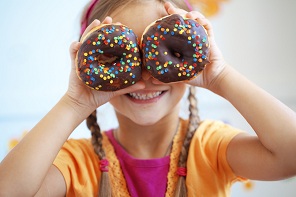 Fluffy doughnuts that taste a little like heaven have to go too—yep, even the ones that come in fun size.

It’s hardly news that doughnuts are not really the best candidates for a healthy breakfast. According to the Academy of Nutrition and Dietetics, eating a healthy breakfast versus one that includes soda or doughnuts can help your child get more nutrients and perform better at school.

Doughnuts are most often than not laden with sugar and trans fat. We all know that sugar is not really BFFs with your kid’s teeth or weight. And sugar combined with trans fat? The worst!

Trans fats raise levels of “bad” cholesterol (LDL) and lower levels of the heart-healthy one (HDL). High-fat intake has been linked to coronary heart disease, in which plaques build up in the arteries, sometimes leading to a heart attack. Store-bought doughnuts contain up to 40% trans fat and about 200 to 300 calories mostly coming from sugar—yikes!

– Leanne Thompson is a writer and a blogger who has contributed to some of the most well-known Health, Fitness and Nutrition blogs. After struggling with her weight in her teenage years, Leanna was driven to undertake a Bachelors of Nutrition degree with the renowned Iowa State University to study the needs of a human body. Ever since, she has made it her life goal to spread awareness about the importance of healthy weight loss and the wellbeing of the people she meets – Find out more at: leanneknows.com