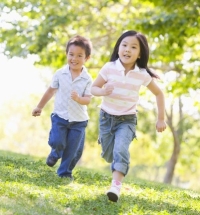 The iconic image of the idyllic American childhood was, not so long ago, based around the idea of spending long summer days playing outside and exploring the neighborhood until the streetlights were illuminated. Today’s fear-driven culture might make it difficult to send your kids outside for the entirety of a day in good conscience without supervision, but that doesn’t mean that they have to be relegated to a lifetime of staring blankly at a television screen, playing video games or cooped up in a community center to stay safe. When safe, sane practices are adhered to, time spent playing outside is not only fun, but also essential to your child’s healthy development and growth. These are ten of the reasons why you might want to think twice before discouraging outdoor play, and how spending time outside is actually good for your kids.

Honing Motor Skills – Kids need to run, jump, swing and tumble in order to hone their basic motor skills, something that just isn’t as easy to do in the restrictive confines of structured, indoor play. Even if your child isn’t able to safely roam the neighborhood with a group of his friends, he still needs plenty of outdoor time to push himself physically so that he’s able to refine those skills.

Vitamin D Absorption – While it’s imperative that kids are properly protected from the sun’s burning and potentially cancer-causing rays, it’s also important that they get 10 to 15 minutes of sun exposure in order to fight off vitamin D deficiency. Unlike vitamin D in supplement form, it’s impossible for a child to naturally produce too much vitamin D in response to sunlight, so letting your child play outside for even a few minutes is typically the best course of action when it comes to combating deficiency.

Encouraging Imaginative Play – Playing with the same set of toys in the same room every day doesn’t give your child much room for imaginative, creative play, which is essential to both cognitive and social development. The great outdoors, however, offers an almost endless array of inspiration for invented games and make-believe scenarios. 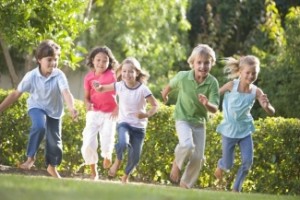 Acquiring an Appreciation for Nature – Kids who rarely spend time outdoors grow into adults who generally don’t spend much time outdoors, causing them to effectively miss out on all that nature has to offer. Encouraging play that takes place outdoors allows your child to become accustomed to and gain an appreciation for nature, and no television show or Internet video can replicate that.

Learning the Importance of Environmental Stewardship – The children of today are the stewards of tomorrow’s environment, and they need to learn the importance of caring for the planet from an early age. Get your kids outside and talk about the environment and all the ways that it needs to be protected while enjoying the great outdoors. Before you know it, you’ll have an active, eco-conscious youngster in the making.

Expending Energy – Shouting, climbing, jumping and running aren’t encouraged indoors. In fact, these activities that are so necessary when it comes to expending energy and blowing off steam are usually downright forbidden inside the house. Letting your child burn off some of that energy outside has benefits for both of you, as well as any fragile belongings in your home.

Exploring and Investigating – Kids need to encounter new and interesting things to keep the spark of natural curiosity burning, because that curiosity is an essential part of both creative thinking and a thirst for learning. There’s not much to explore between the couch and the refrigerator, but your own back yard can be a veritable goldmine of activity and wonder.

Pushing Boundaries and Taking Safe Risks – No parent wants their child to engage in risky behavior, but safe risks are an essential part of learning and confidence building. Kids who push their own boundaries by testing their abilities are more confident, more active and less likely to suffer from the low self-esteem that plagues so many of today’s youth.

Reducing Exposure to Germs – There’s a reason why colds and flus seem so abundant in the winter time. When stifled in rooms with little fresh air and relegated to close quarters with others, germs spread from host to host with ease. Outside, airborne bacteria can be swept away on a light breeze, rather than finding a new home in your child’s body.

Fulfilling Kids’ Need for Freedom – As a parent, your first instinct is to keep your child as close and as safe as possible. While it is your job to ensure that no harm comes to them, it’s also important that you allow them enough freedom to explore and assert a bit of independence. Letting your kids roam the lawn, even if it’s fenced in and you’re standing on the porch, or play on the playground while you’re sitting on a nearby bench, can fulfill a bit of that need for freedom that’s so important to their growth and development.

– Submitted by Molly Cunningham of Live In Nanny.