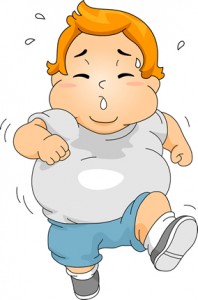 I really like Mrs. Obama, and many times, I am inspired by her. I do give the First Lady a lot of credit, and I respect her as well as her work. I do feel she is a strong advocate in the fight against childhood obesity, but I sometimes wonder how many health organizations and individuals out there in the health / fitness industry will feel when they read ‘she‘ has reduced childhood obesity rates? She has brought great attention to the cause, and has been a positive role model for many children. For me, if any child has lost weight, and reduced their obesity, I give ‘them‘ the credit. But, kudos to Mrs. Obama, as I do appreciate what she has done. Please visit the Daily Caller web site (link provided below) to read the complete article”

“Mrs. Obama launched Let’s Move! on February 9, 2010 to unite the country around our kids’ health and create real support for families to live healthier lives,” reads an announcement from the Office of the First Lady. “Since then parents, business leaders, educators, elected officials, military leaders, chefs, physicians, athletes, childcare providers, community and faith leaders, and kids themselves have stepped up to improve the health of our nation’s children.”

“Thanks to these efforts … the national childhood obesity rate has leveled off, and even declined in some cities and states,” the statement says, marking the third anniversary of the first lady’s signature public health program.

That assertion is bolstered in part by a late-2012 report from the Robert Wood Johnson Foundation — an organization that has been publicly supportive of the first lady’s initiative — that revealed a decline.

“In recent years, the national childhood obesity rate has leveled off. However, some cities and states have reported modest declines in their rates, following peaks in the early 2000s,” an overview of the RWJF report reads.

The report received wide attention last year thanks in part to the New York Times’ reporting, and credits expanding food regulation in cities like New York and Philadelphia with small declines in childhood obesity between 2006 and 2010.

But The Times cautioned against giving the first lady too much credit for the shift:

“Though obesity is now part of the national conversation, with aggressive advertising campaigns in major cities and a push by Michelle Obama, many scientists doubt that anti-obesity programs actually work. Individual efforts like one-time exercise programs have rarely produced results.”