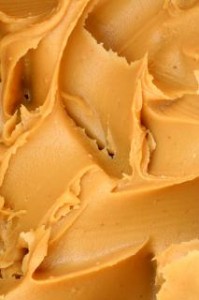 This is another big one if you have kids. How much peanut butter do my kids go through in any given month? Since they only eat peanut butter and jelly (or honey) sandwiches in their packed school lunch (they hate deli meat for some unholy reason) that’s at the LEAST, 5 sandwiches x 4weeks. That’s 20 doses of peanut butter per kid PLUS the amount my husband consumes.

We buy organic because non-organic peanut butters are high in pesticides and fungus and contain aflatoxin, a potential carcinogen. The non-organic kinds are also full of tons of other garbage to make them that plasticine smooth texture, and also to make them sweeter. Yes, you have to stir that layer of peanuty oil into your peanut butter yourself like some kind of chump when you buy organic… but you are stuffing considerably less poison into your body. So… worth it? Hell yeah. Anything your family eats a LOT of — and I bet most of yours eat a lot, too — is worth switching to organic for.

Oh, the potato. You delicious thing, you. These root veggies are a staple of the American diet, for sure. Up to 30% of our veg consumption! This is one of those things that switching to organic on can have a huge impact. Conventionally grown potatoes are some of the most pesticide contaminated veggies. Even after being peeled and washed, these babies are still soaked in pesticides. Buy organic on this one, and you get some of the biggest bang for your extra bucks.

After bananas, apples are the most commonly eaten fresh fruit. They are also soaked in just as much pesticide as potatoes. Buy organic apples and apple-products, they taste better and won’t poison you. Even better if you can find locally grown apples… less carbon footprint, which is something that all Organics still have a long way to go on.

True that many Organic chicken growers “claim” that their chickens have access to the outdoors … but these are still chickens living in intolerable situations, and since organic chickens are not fed antibiotics to combat their desperately unhealthy living conditions, the growers are terrified to let them outside until the last few weeks of their lives. But just think for a moment… these chickens may only have a few more square inches of space to move in, but they do not have their beaks blow-torched off, nor are they packed so tightly together that they can barely move. Add in the lack of antibiotics and, often, the lack of being fed their own species – ground up into their feed to help fatten them – and you have a chicken that is one step closer to being something you might actually not feel as terrible paying for. Deny Tyson your hard-earned dollars… its possible they might one day try to change their hideous factories to get those bucks back. Plus, every chicken you don’t buy from the Factory Farm is less pesticide dumped into rivers, less chemicals and drugs you are ingesting, and a slightly less black mark on your conscience.

– Analise Dubner is a backpacker, reader, science-nerd, and an obsessive freak about sci-fantasy shows. She writes about health issues for Ranker.com, a platform that hosts thousands of crowdsourced answers to opinion-based questions.