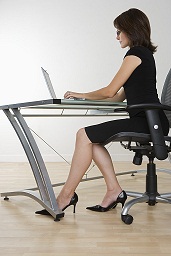 New research and science are increasingly showing the negative impact of a sedentary lifestyle, and this includes spending many hours seated at a desk while you’re in the workplace. Some of the risks of long periods of sitting include weight gain and obesity, an increased risk of diabetes, and a higher likelihood of developing heart disease. According to the Guide to Sitting Disease from Beyond the Office Door, 50 to 70 percent of people spend at least six hours sitting every day.

To combat these issues, more and more workers are opting for a standing desk over the traditional office setup where they’re seated for the majority of their workday.

If you’re considering the use of a standing desk, you may be wondering what the benefits are, specifically, of this type of setup.

Below are a few of the biggest standing desk benefits that can have a positive impact on almost anyone.

Preventing Weight Gain and Increasing the Number of Calories Burned

When you’re seated, you’re burning very few calories, which can lead to weight gain and an increased risk of obesity. Consider these figures, based on the use of the Calorie Calculator from JustStand.org, which show that a 150-pound person who works seven hours a day would burn 788 calories while sitting, as compared to 1050 calories if they stand while working. That’s an additional 262 calories a day just from moving from sitting to standing at work.

Reduction in Back Pain

Many of us have significant back pain, and this can lead to more serious injuries and chronic suffering. Back pain can hinder our lifestyles and our productivity, but a lot of workers find that standing for at least a portion of this work day can help them alleviate some of their back and also neck discomfort. Much of this comes from the fact that sitting at a desk can lead to poor posture and slumping, which isn’t going to occur with a standing desk, particularly if you focus on standing up straight and maintaining good alignment.

It’s not just physical improvements that you might see from making a move from a sitting to a standing desk. It can also lead to mental improvements that can make you more alert and productive throughout the day. When you’re sitting for long periods, you may tend to get drowsy which can lead to declines in your energy and productivity level. When you’re standing you’re naturally more energized, so you may find that in addition to feeling better, you can get more done in a shorter amount of time.

According to research conducted by the Take a Stand Project, after a seven-week study, participants who used a standing desk said they had less fatigue and stress than the participants who were seated during their entire work day.

Also interesting was the fact that 87% of the people who used a standing desk said they felt like their vigor and energy levels were improved.

As part of the study participants went back to the original seated desks, and mood levels seemed to go back to their previous levels.

These are just a few of the many advantages of standing at the workplace, rather than remaining seated, and all of which can be good not just at the office, but for health and mental wellness outside of work as well.