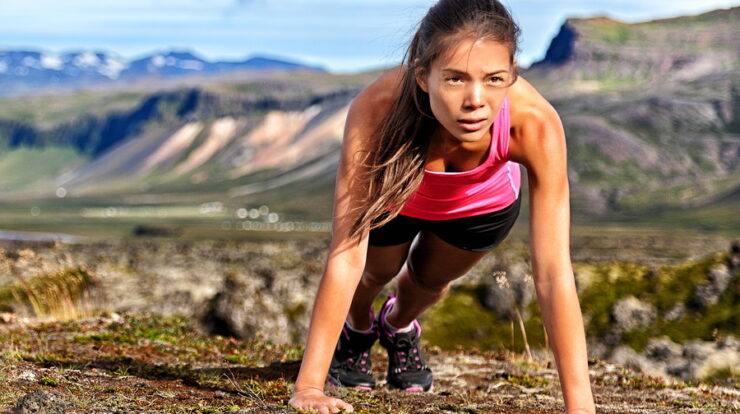 Before or after exercising, think twice about what you put in your body. Depending on your workout and intensity level, different exercises require varying methods of refueling. Roberta Anding, registered dietitian, sports dietitian and assistant professor of orthopedic surgery at Baylor College of Medicine, explains approaches to take with food and exercise.

“First and foremost, it’s about honoring your own physiology,” Anding said. “If you have been training for a while, you know what you can tolerate and what you can’t. However, the general principle is the longer and harder the exercise, the more your body will rely on carbohydrate as a fuel. In addition, with longer and more intense exercise, more blood flow gets directed to the arms and legs and less is available for digestion.”

For those who exercise in the morning before work or starting their day, eating prior to your workout depends on the intensity and what your gut tolerates. If the intensity is great, such as repeated sprints or high-intensity strength training, a liquid fuel such as diluted juice or a sports drink will leave your stomach faster than solid food. If that still makes you feel queasy, try something called “swish and spit.” This means you swish a sports drink in your mouth and then spit it out. There can be some absorption of carbohydrate through the lining of the mouth.

Try eating a light carbohydrate such as oatmeal or a banana for a moderate-intensity workout. The demand for fuel will be lower after a mild workout, like walking on the treadmill or walking your dog, and needs no special preparation since it is a low-intensity workout.

People who exercise in the evening after work often worry about eating large quantities for dinner post workout. The key is to go into your workout with adequate fuel. If you skip lunch and then exercise, the post-exercise appetite surge may make you overeat. Anding suggests eating a nutrient-dense meal with quality carbohydrates and protein for dinner, such as grilled fish with sweet potatoes or salad, to refuel and avoid overeating before bed. Another strategy is to have a light snack about 45 minutes before visiting the gym, which may not make you feel as hungry for dinner. You should eat a banana or an apple, or keep non-perishable, quality carbohydrate foods in your desk, including instant oatmeal or instant rice and beans.

Snacks and meals before exercise also depend on a how much time you have before hitting the gym. If you have two hours before a workout, you should eat quality, moderate-fiber foods, such as oatmeal, sweet potato, whole wheat toast or whole grain crackers. You can add a slice of cheese or a tablespoon of peanut butter as well. A sports bar with some protein would be an easy and convenient choice. Avoid fiber-enhanced foods before exercising. Be careful of bars that are labeled low-carbohydrate or low-net carbs, as they often contain too much fat or a sugar alcohol that can cause GI stress. If you only have a 15-minute window, consume easily digested snacks, such as a bowl of grapes, clementine, half a banana or an apple. Protein can slow digestion, and you need the fuel in your muscles and not your stomach

“Carbs are the fuel for exercise,” Anding said. “If you’re going on a run, you don’t want to eat eggs, bacon or cheese beforehand. These are all protein-containing foods that are not fuel sources. Instead, go for a slice of toast or half a banana, especially if you are exercising in the morning.”

The three Rs are the most important tasks post workout: refuel, rebuild and rehydrate. For runners, the focus may be on eating after exercising. Anding suggests a lentil stew with brown rice to rebuild the carbs used while running. With strength training, part of what makes people stronger is ending up with micro tears in the muscle. Protein is key for rebuilding damaged muscle fibers. Whey and casein provide the best efficacy for rebuilding. Whey is a fast-acting protein that contains the powerhouse amino acid leucine, which helps you rebuild faster. She suggests making a milk-based or Greek yogurt-based smoothie to get whey and casein for rebuilding. Leucine is found in smaller amounts in plant-based milks, so it is important to consider your post-exercise goals.

It is very easy to pick the wrong snack to coincide with a workout, especially if body fat loss is the goal. People often think if they sweat, they are burning a lot of calories, which is not the case. This leads to out-eating the exercise. Many foods qualified as healthy, such as almonds and avocado, are high in fat, meaning they are calorically dense. A handful of almonds is nearly 300 calories, and you must walk around three miles just to burn off the small snack. She also stresses to not load up on energy-dense bars before exercising, especially for low intensity workouts.

“Only 25 percent of Americans meet the physical activity guidelines, so 75 percent of adults aren’t getting a minimum of 150 minutes of exercise a week,” Anding said. “Just do something you enjoy on a regular basis, and play around with your fueling choices depending on your weight goals and what you can tolerate.”

After Before Determining Exercise Meals