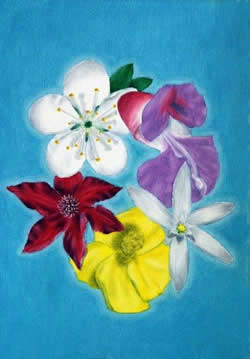 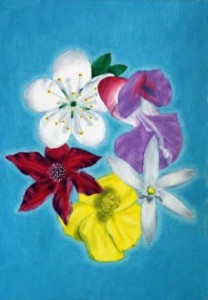 Bach Flowers (pronounced Batch) heal from the inside out. They work at the invisible level of energy and transform a negative condition into a positive one. If you’re an old-hand at Bach Flower Remedies you will understand this concept right away. If you’re new to the remedies, maybe the explanation ahead will help you.

Decades ago I became interested in the Bach Flower Remedies because I liked how I responded to Rescue Remedy – the Big Daddy of the remedy collection. Rescue Remedy was my go-to potion when I was under stress or facing a challenge. It worked so well for me, and changed my pent-up anxiety into such a calm front, that I bought a book so I could learn more.

I found the information in that book to be dense and intimidating. I bought another book thinking the new author would make learning easier. It didn’t happen. The more books I bought, the more confused I became. Ten books later, and a great deal of experience with the remedies, I decided to cut to the chase and write my own book. I honed down volumes of information onto one page to make the information not only easy to digest, but also easy to apply and use.

According to Dr. Bach, illness is an imbalance in the systems of the mind, body and soul. He believed that if you could change the mental state causing the illness, you would heal the person. He spent his life looking for compatible plants that held the vibration of qualities that would alleviate various conditions.

Dr. Bach was not an airy-fairy bark-eater who lived in the woods and only conversed with squirrels. He was a celebrated, leading-edge medical doctor who had been educated in London and who invented vaccines to cure bacterial infections which caused many illnesses. He related certain strains of bacteria to specific types of personalities and thus made the mind-body connection back in the 1920’s.

Bach grew up in Wales and his greatest joy came from his love of the countryside. He was curious and observed everything he came into contact with. His pulse raced when he was in natural surroundings and he loved how nature made him feel when he was engulfed by it. He learned huge life lessons from nature and was so inspired by what he observed that his entire career was dedicated to bringing harmony, balance and connection to each person suffering with illness so they might heal through their minds, hearts and bodies, simultaneously. He believed our mental states bring about our ills and, by changing those, perfect health would ensue.

Bach chose flowers as his messengers and through the essences he cultivated from the blossoms, he was able to transfer living, healing energy into each person as they consumed a potion of his remedies diluted in spring water.

– Kac Young , a former television director and producer, has earned a Ph.D. in Natural Health and is a Doctor of both Clinical Hypnotherapy and Naturopathy. She is the author of 10 books. Visit: http://www.BachFlowersQuickGuide.com for more info.